But when I saw Lego was doing a play set for the Apacolypseburg city from Lego Movie 2 I had to have one, even if it meant building it and taking it apart again as I have no room for it.

Luckily I found room for it, but it meant taking down the Super Star Destroyer, but honestly I was never much of a fan of that ship, chock my review on it if you are interested.

So when I found out Lepin was making this set it was a no brainer for me.

Coming in at 3560 pieces this is a LARGE play set. When the average sets are under 1000 pieces, it is nice to see Lego jumping in to something of this size for a family friendly set.

While cost prohibitive from Lego ($499 Canadian) it was much more reasonable from Lepin at just $112usd.

It is stuff like that that drove me to Lepin in the first place.

The set is thankfully well numbered and easy to follow, all new Lepin sets are now, or the official Lego ones at least.

Like usual it comes all jammed in one very tightly packed box. 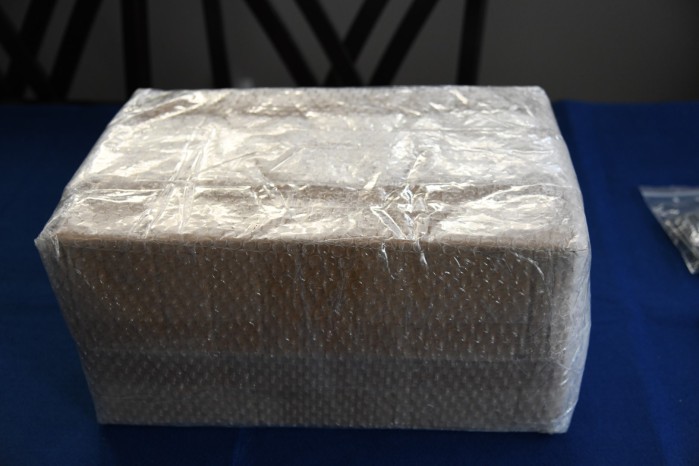 The manual itself is about 3 lbs!

So with almost all the bags numbered properly, what I do to sort them is put them into their piles, then I put the groups into plastic grocery bags. So Step one uses bags 1, 2, 3 and 4. So all of them go into one grocery bag. This definitely helps for large sets like this. 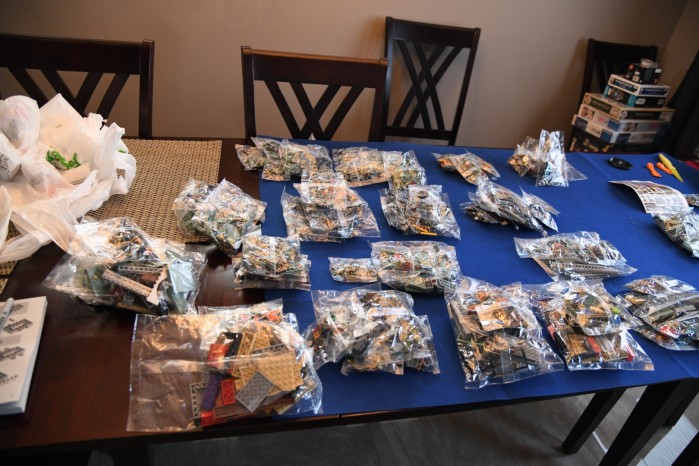 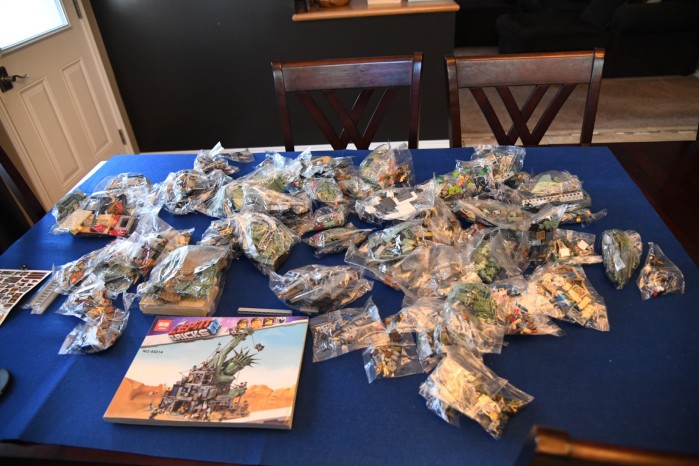 Oddly there was 2 bags with no numbers and a handful of bricks that were loose and could be from any bag as a couple were ripped (which always makes me nervous). They did end up being used later, but with brands like Lepin, you never know what they could be, I have read of folks getting random bags from other sets before, so who knows! 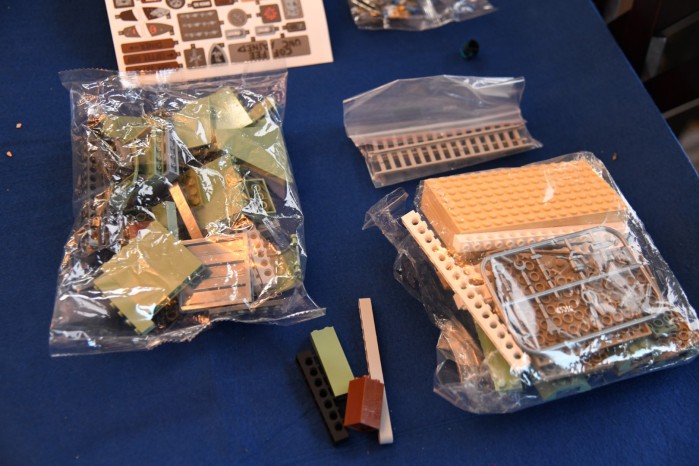 Each of the steps consist of 3 to 4 sets of numbered bags, and there is a total of 18 numbered groups. This is all the bags in Step 1. 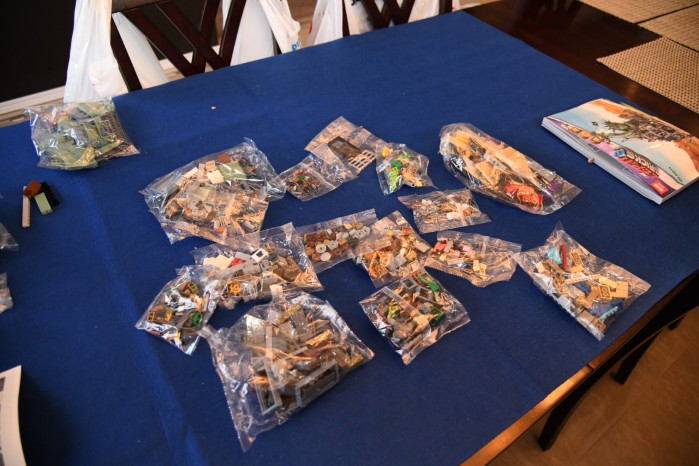 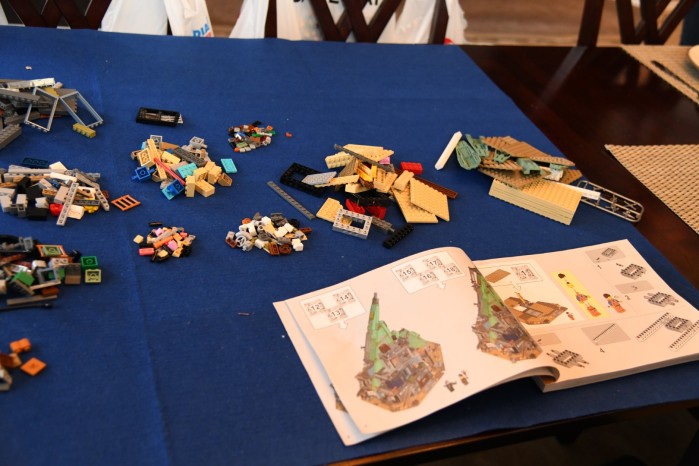 There is a ridiculous amount of detail in this set, every nook and cranny is filled with cool things, like rats in the display case for sale and coffee from a gas pump in “Coffee Un hainded”

The main level is complete and again, filled with tons of detail, from poor Surfing Steve looking pretty bad ass with his chainsaw and  his awesome surf boards chilling in front of his Winnebago. 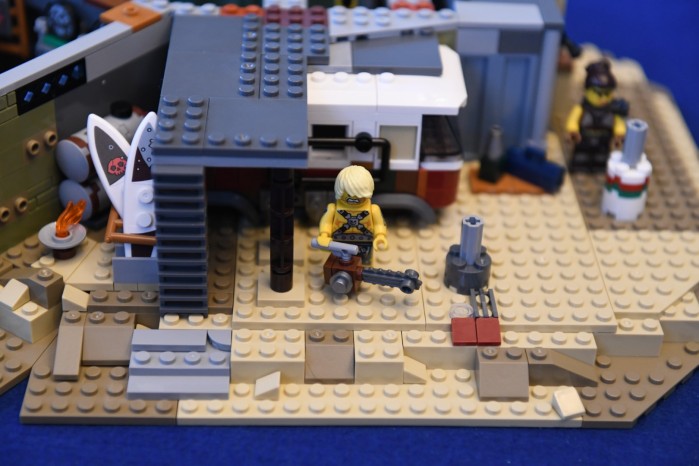 To fish hanging out in the outdoor kitchen. 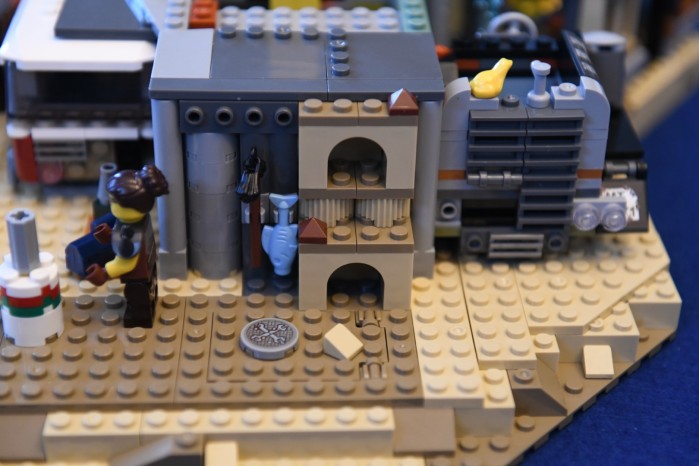 To the awesome makeshift gym with home made weights and punching bag. 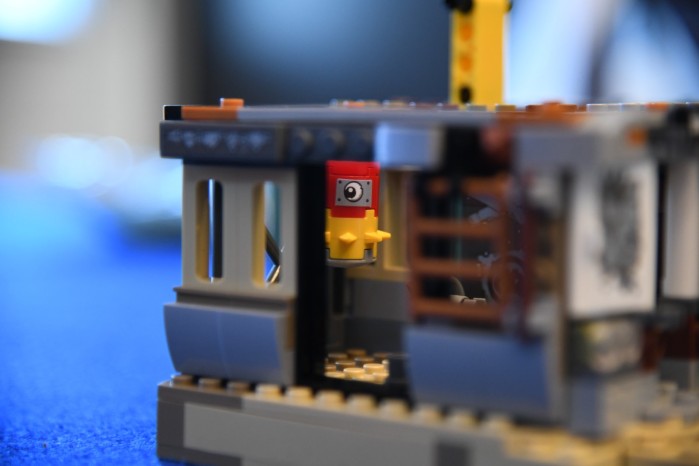 Clearly everything is now Awesome as we need to bathe outside and have a place for criminals. 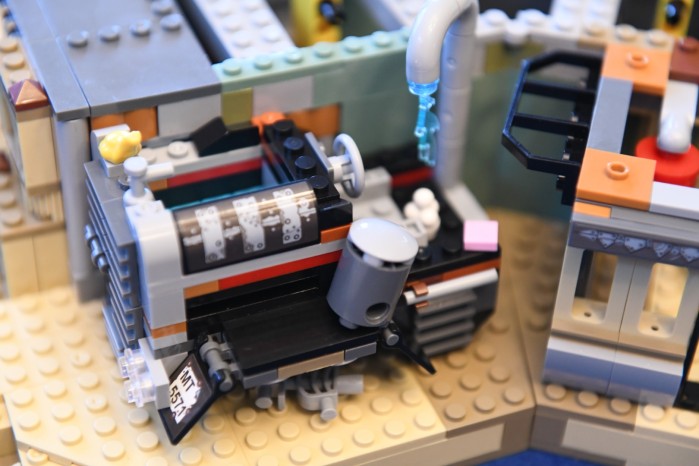 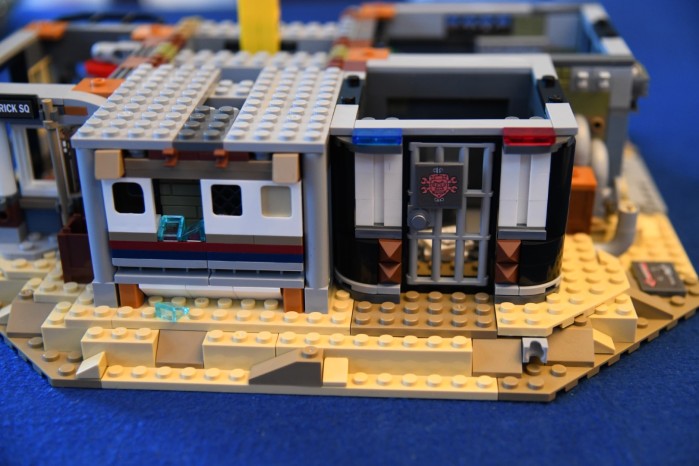 This set is definitely not for the space challenged as it is massive, the base comes in at 19″ by 12″ but it is somewhat angled so it seems a bit larger as a whole in how it will fit on a shelf.

Little details are really everywhere, we have a burger joint out back, a workroom and the list goes on. 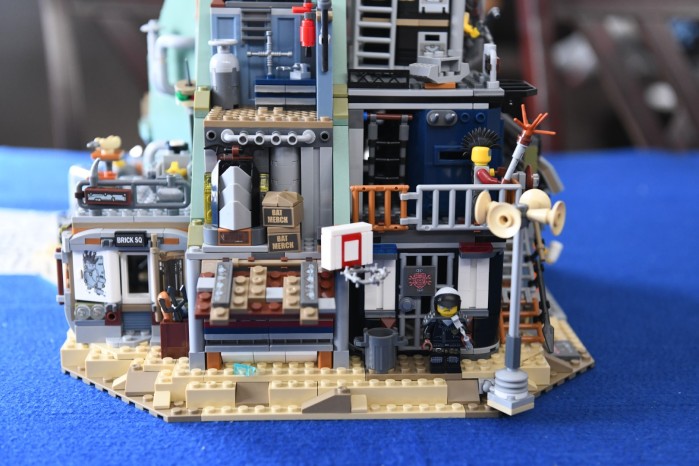 Every layer has a few rooms with more stuff to do.

Batman sits atop his perch above Wildstyle’s bedroom. keeping an ever watchful eye on the town. 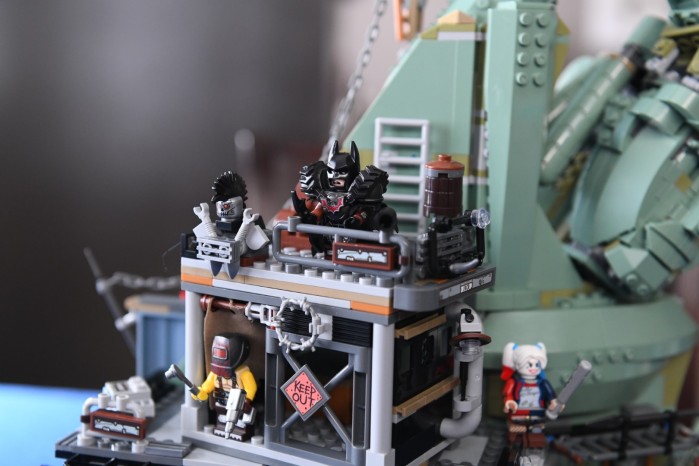 Once fully assembled it stands at a whopping 20″ tall 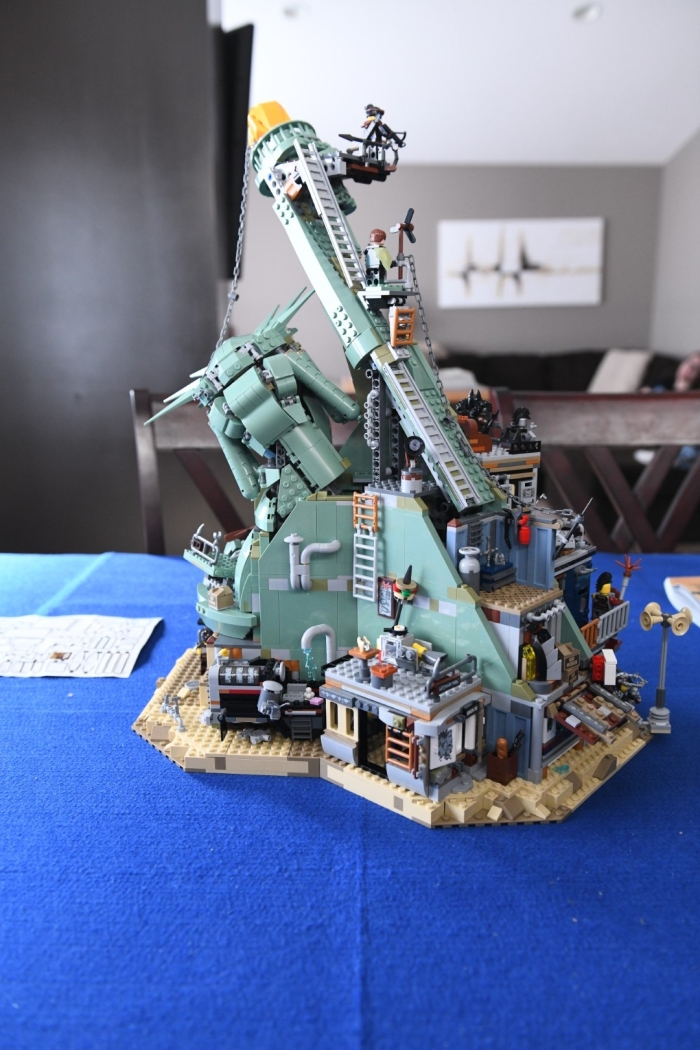 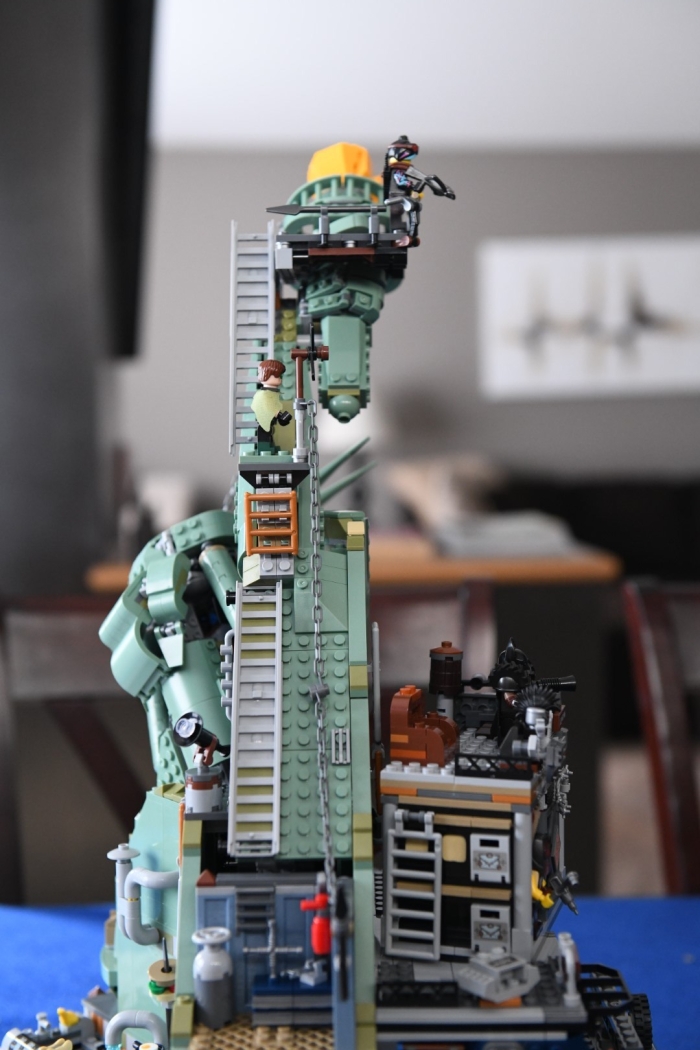 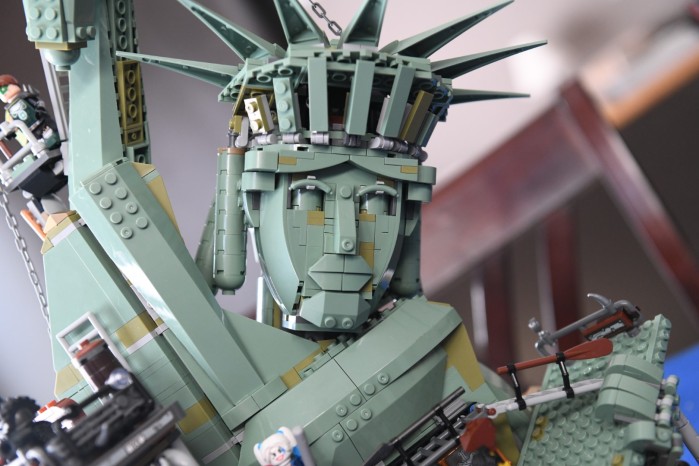 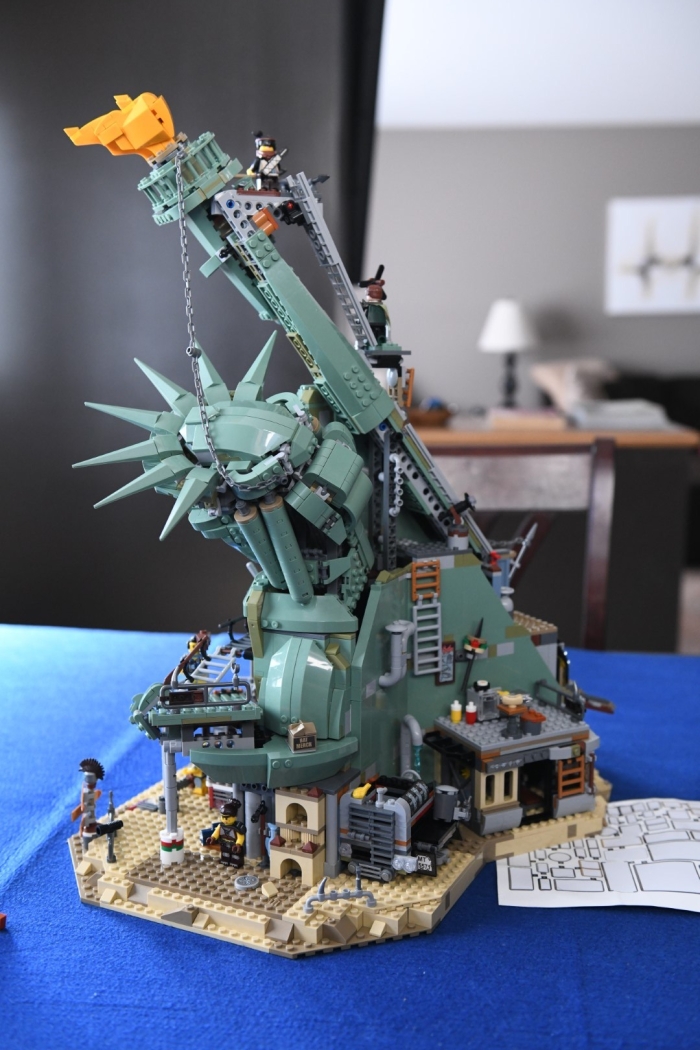 The cobbled together mish mash of styles is what makes this set so great, nothing looks like it belongs, yet it all somehow fits.

Definitely one of my favorite builds of all time. 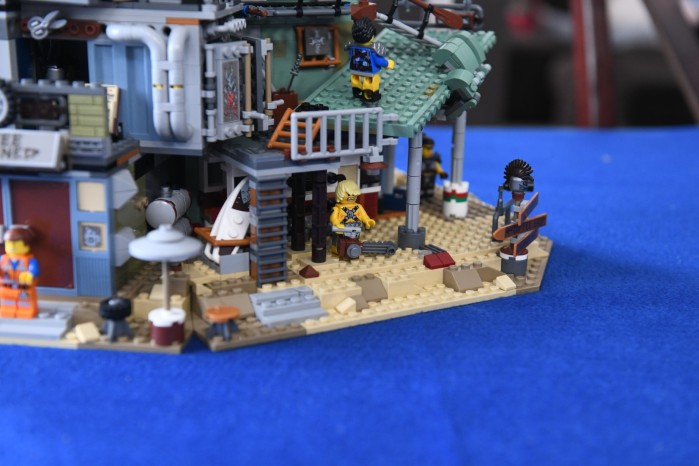 Just make sure if you are ever in town, skip the burger place, their hotdogs could kill you, or at least break a tooth!

This set was so much fun and looks really great on a shelf, and is a great talking piece for the mature builder.

For a Lepin set this is top notch. I didn’t have a single issue issue with it, and it went together like any normal Lego set.

Clutch was perfect, colors seemed accurate, no mini figs looked weird, they all had the right hair and faces.

I built this over the course of a week, a couple hours at a time in the evenings.It was not a hard build in any way, you can see it was definitely aimed at kids, which is fine too as it added a bit to the fun factor.

If you are looking for a cool alternative build, definitely pick up Welcome to Apacolypseburg, you will not be disappointed.