So a new addition to the CCG site will be some toy reviews and unboxings.

I have been doing this already via our YouTube channel, and decided to branch out a bit into the blog site as for something like Lego it is much easier. I have no interest in doing time lapse build videos, but thought I would share the some insight into the more complex sets I have.

I have been a long time Star Wars fans, and have been collecting Star Wars Lego since it debuted on the market in 1999 along side the release of Phantom Menace.

Back in those days I purchase 100% of the sets available, and did so for the better part of 5 year, until space (and money) ran out and Lego upped the production to WAY more sets per year.

At that time I dialed things back to just buying the Lego Ultimate Collectors Series ships, then even that waned as the price increased and the Canadian dollar dropped.

Over the years I have sold off about 90% of my collection as to be honest, the builds are just too damn big. I loved my UCS Millennium Falcon, but it was 3 feet long and 20 inches wide, my home just cannot accommodate something that big for a collectable.

But 2015 brought in a few new sets that are WAY more shelf friendly, and also priced reasonably. So I decided to take the plunge back into Lego with their long overdue UCS Slave 1.

The set retails for $225 Canadian, which is a pretty reasonable price for just under 2000 bricks. 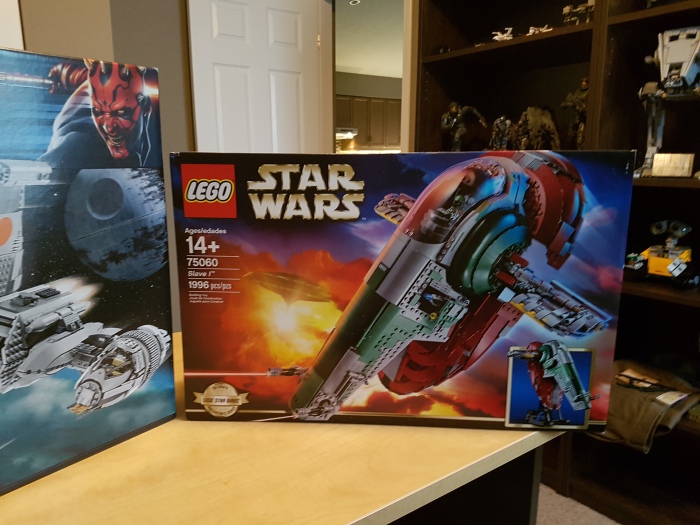 The instruction manual was pretty beefy for the set clocking in at just over 300 pages. 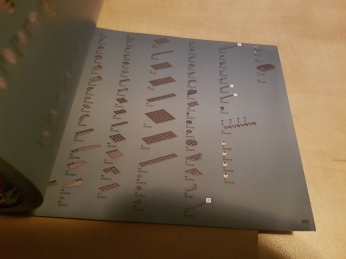 And also containing 14 polypags of pieces. Gone are the days of opening all the packs and pouring them into one pile, Lego has chosen a new approach bu setting up the instruction based on bag numbers, so each specific bag contains all the parts needed for a single section of the ship.

Not sure I like that idea as I came from a place of dump them all out and go nuts, but it certainly takes the brick finding frustrations away from a 2000 element build.

Construction for the ship itself was very well done. A extremely sold build that once complete felt a lot like a playset more than a UCS ship, and by that I mean you could pick it up without fear of pieces falling off. There have been a lot of ships over the years that were very poorly made and looking at the sideways would cause parts to drop off. Not the case with the Slave 1 thought.

The base of the ship used a real unique build, putting together long flat sections small single elements to connect to the bottom of the ship, allowing for a much smoother finish. 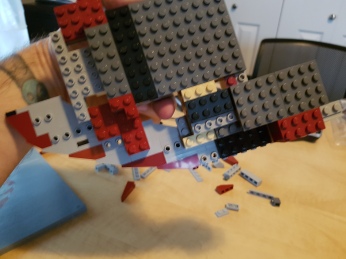 The internal framework was something similar to most Technic sets, with a solid frame that was wrapped in some nice shiny smooth elements not seen before in any other set.

All told be build ran about 4-5 hours over a single afternoon.

The finished product sits upon a very well constructed stand. In the past the stands were a little flimsy at times and didn’t exactly feel safe.

This new design though is very solid, they employed the use of smooth bricks as well to give it a much more polished look, almost looking molded out of plastic rather then just more standard dotted Lego bricks.

Another great addition is the solid plastic mold for the sign. In the past left used 1×8 smooth elements across a large flat plate to make up the surface for the sign sticker to be applied. This was fine day one, but after a few months when the sticker shrunk down a bit, you could see all the little lines along the sign. This new design is 1 large smooth plate that works perfectly and offers a solid smooth surface.

Lastly, this set came out February of 2015 and is still available for now at at major retailers like Amazon and Walmart, and of course Lego.com itself.

The set is listing as hard to find which means it is getting close to being retired, so I highly recommend if you want one, grab it soon before it goes off the shelves and the price goes through the roof.

A well rounded set that was fun to build, and highly recommend for the SW fan and Lego collector alike, a solid 10/10.

So I have been playing the Lego franchised games now since the very first title back in 2005. Having been a kid who grew up playing with Lego as his secondary source of entertainment, second only to watching and re-watching Star Wars a few hundred times, I was immediately draw to the franchise.

The ability to play as characters from my favorite franchise of all time in the form of toys I adored my whole life was almost too much to handle. My son and I sat down on release day back in 2005 and dove in head first and played for days searching for every mini kit, every gold brick and every hidden secret the game could provide.

And here 11 years later, my son grown and moved out, here I sit, 40 years old playing the same Lego games we enjoyed so many years ago together.

In the past 11 years the TT  games has stuck with a tried and true formula, yet managed to evolve into a much more robust games than their original release.

The old basics are still here, missions unfold one at a time and unlock a free play mode once complete. There are 10 mini kits to collect on every level, most of which you cannot obtain until the game is complete and you play again in free play mode. There are 250 gold bricks to collect, and the typical 18 red bricks that unlock cheats or goofy bonuses to the game, like high pitched voices for all the spoken dialog, or bananas for torpedoes on ships.

So in a franchise so old and that typically sees 2 – 3 franchise based releases a year, how could they keep things fresh?

Well this time around the small hub worlds from the original Lego Star Wars Saga have been replaced by massive sandbox like levels with a plethora of things to do. Each hub world holds about 40-50 gold bricks to be found, most of which are unlocked by completing small side quests for characters.

From completing a race, to finding missing droid parts, the side missions can take a minute or two each to complete. But overall there is over 50 of these types of missions spread over 4 main hub worlds.

On top of that the character unlock is a little different now too, where in previous games you would simply buy or unlock characters by playing missions, and for the most part still do. but this time there is 35 special characters that can only be found frozen in carbonite. All of which are previous franchise faves. From Luke and Han in storm trooper outfits, to Dooku and Darth Maul.

Lastly and the biggest change in the franchise is the amazing 3rd person shoot outs the game has added.

As specific times in the story missions you will enter into an over the should view of your character and enter into a cover based shooter mode. With specific tasks to complete before you can move on, from blasting a per-dertermined amount of Stormtroopers, to blowing up ships and shielded cannons.

It really adds a cool aspect to the tried and true Lego game formula.

The bonus missions bring some real cool content. All these missions are based between Return of the Jedi and The Force Awakens.

We get to see Poe rescue Admiral Akbar, Kylo Ren hunt for the map that leads to Luke and narrowly missing Lor San, and 4 others. While TT does their usual tongue and cheek play on things, for die hard Star Wars fans it is a neat exploration of things unspoken in the film.

Lastly there is a season pass available that will be adding 4 more story based side missions to the game, first of which will be released on August 9th called The Phantom Limb. Explaining how C3-P0 got his mysterious red arm. This particular DLC is free to PS4 owners, and no release info is available as to other consoles yet.

The remaining 3 DLC levels will be coming later this year and possibly into 2017 and runs an additional $10.

All in all my play through lasted 23 hours, and that is to a Platinum 100% finish. Main story and the 6 side mission clocked in at just under 10 hours.

Well worth the money in my opinion for the entertainment value you get.

Now the game is not perfect sadly, as with most titles, TT does a great job building the world, but ensuring it does not fall apart or get vacuumed up is another thing.

The game itself is marred with a lot of technical glitches.

What makes this more annoying than it should be is 2 fold, number one, the time it takes from starting the disk to actually getting to play, is about 2 whole minutes.

There is no way to skip the TT logo animation, the 3 Lucasfilm / Star Wars splash screens, and the entire D’Qar menu load. This does not sound like much, but in the midst of a battle or real interesting part of the story, getting punted out and taking forever to get back into the game is a real pain in the ass.

Secondly, you have to start whatever you were doing all over again. There is no checkpoint system in place for levels, so if you were seconds away from finishing a mission, then you start back at the very beginning, sans any collectibles you unlocked along the way.

I have also read (but thankfully didn’t experience) a save game corruption bug that can happen  when your game crashes. So every time you get dropped, you run the risk of losing 100% of your progress.

There is also some nasty slowdown that seems to randomly happen on Star Killer Base and on D’Qar. The weird thing is it is completely random. You can fly down to either area and be perfectly fine, then on the next visit the game is seeing massive screen tearing and choppiness.

That being said, all things considered, Lego SW: TFA is still an amazing game. TT managed to milk the movie for all it is worth and offer up a great 20+ hour experience, a pretty bold move considering most of their games encompass 3-4 movies at a time.

If you are willing to overlook the technical side of things, you will be in for a really enjoyable experience all in all.