So last year I upgraded to a AV8802, and while it was an amazing receiver, it still lacked a few things I had on a wish list in the back of my mind.

One of the major things was when I moved to Atmos, I lost the ability to use my front Height speakers and my Wides.

The unit had only 11.2 hook ups, which in honesty is way more than most, but it still was a sticking point as I had these speakers here that I had not used for over a year now.

Once I started to see the reviews dropping about some of the extras, I was sold hook line and sinker.

One of the biggest upgrades in my eyes was the ability to use the new Audyessy app to configure, calibrate and tweak, and additionally swap back and forth between calibration files.

Now I will preface this with 2 things, one it does not work perfect for everyone.

I personally have not had a single issue with the app, but if you look at the comments and reviews on it, there are a lot of unhappy folks.

My take on it is, a lot of these people are in no way tech savvy at all.

I get that they bought an expensive piece of audio equipment, but that does not mean they know their ass from a hole in the ground when trying to get things in your house networked and talking.

As the primary complaint is connectivity, and that is almost solely dictated by your equipment and know how, it is easy to see that most people having problems have no clue how to use the tech.

Now I just bought a $6000cdn receiver, seriously, we need to pay another $35 to use it to its fullest?

This is a blatant money grab by Marantz, and one I am rather grossed out by.

Especially since as many folks claim, they have issues with it, and support from what I have read is non-existent.

Major oversight, or colossal FU to the customer, not sure which it is, but either way it leaves a very bad taste in my mouth.

The application itself is a dream to use. Gone are the days of navigating the menu on the small screen, or relying on the display output to clunkily go through the setup.

Fire up the app, connect to your receiver, and then begin the config.

It is actually really user friendly given what you are doing here.

The prompts all look familiar as it is pretty much the OSD calibration, just in the app.

Once you roll through your setup and get the readings from the 8 locations, the file is saved on the app and ready to go.

What I did not realize out of the gate is you have to actually tell it to upload to your 8805. I was a little surprised that once I was done, and checked the receiver none of the Audyessy stuff was applied.

This part was not really clear in the app.

So once finished, you choose where to send the file, this can also be to external storage like google cloud services and such.

Once things are calibrated, and before you upload, I would highly recommend looking at the post configuration of each speaker and levels.

This is where the tweaker paradise comes in.

You can go channel by channel and adjust the frequency bumps as you see fit, you can see how well the room correction was applied. And get an overall sense of how good or bad you room is acoustically.

Now I have a fully treated room for 1st reflection point on all speakers. As well as diffusers on the back wall, and bass traps in the back corners.

And as you can see in the pictures below, my well treated room is still a bloody mess.

Here you can see the Front Left Channel, this has total treatment for 1st reflection: 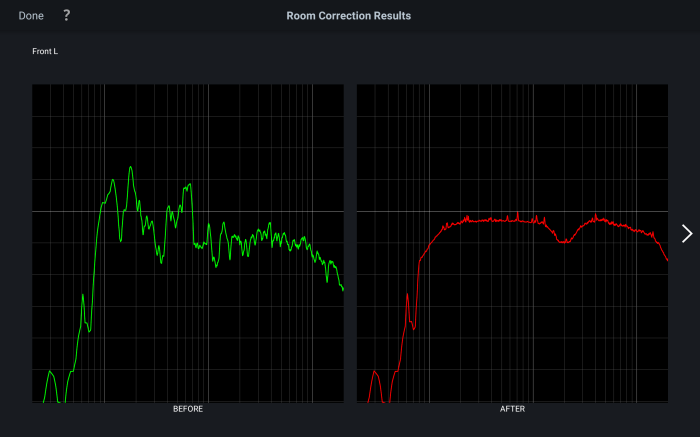 Here is the Center Channel, should have no reflection here due to location: 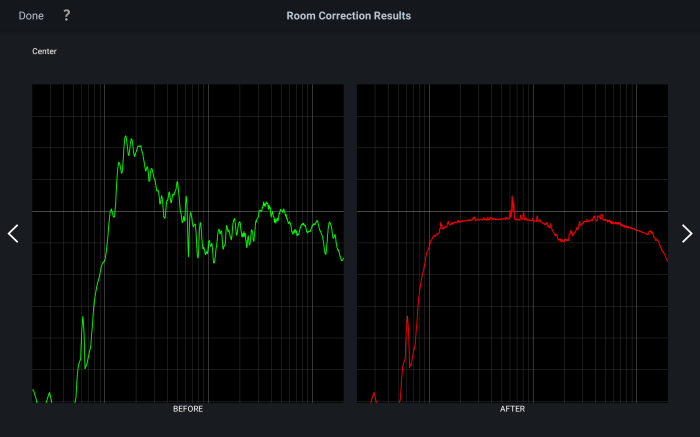 Here we have the dual subs, this is one of the biggest fixes, having dual units is very hard to calibrate yourself, and their placement can be really tough at times.

The Audyssey cleans this up near perfectly: 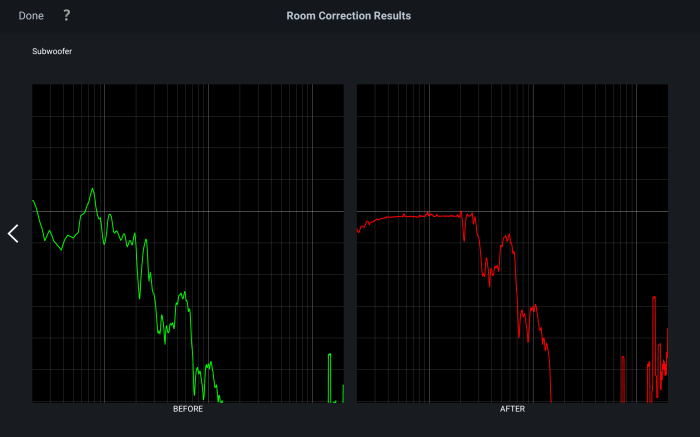 Now I do have one major gripe about how the calibration is handled here.

The issue is that if anything changes with your speaker config, then you have to do a re-calibration.

There is no way to do a one time, 15.2 speaker calibration.

Now to compensate for this, the app itself allows you to save multiple calibration files. Which kind of saves the day here.

The problem is that should you choose to switch back and forth, it is not a fast task, it can take 5-10 mins to transfer the calibration file to the 8805 from the tablet application.

So, there is no easy A/B test if you are trying to find out what mode sounds best for a particular movie.

Besides that, little oversight on Marantz part, the unit is a dream to own.

There is nothing I have not thrown at it that has not been presented with pure audio and video bliss.

When it comes to games things both look and sound phenomenal.

I run in Dolby + Surround mode 90% of the time, to allow for a faux Atmos processing to be done. Throwing sound to the ceiling channels in some games sounds incredible.

Your room goes from being 2d to 3d in a click.

There are a few instances where this does not work well though.

As this is just emulating Atmos, and it is only an approximation, things can get thrown to the ceiling that should not.

For instance, in Destiny 2, some of the NPC characters in the Tower when positioned behind you, will en up om the rear ceiling channel shouting down at you.

But all in all, I see the benefit more so than the annoyance, more often than not it sounds great.

When it comes to movies though, things are outstanding.

Movies like Logan, the forest scene feels like you are right there, the wind rushing through the trees above you, the room is just alive.

I have yet to watch a movie that has not been enhanced by having all 6 channels overhead active.

Video has presented no hiccups either. With full 4k 4:4:4 pass-through I have not had a single handshake issue to day.

I have run it through the paces with 3d, 4k and SD and it all comes through just fine.

None of which I sue as I have a HTPC hooked up.

Other features include full HEOS support, so you can do direct voice control for the unit if you wish via Amazon Alexa or Google Assist.

This really is the Swiss army knife of receivers.

While this is definitely one of the more expensive receivers on the market, it is hands down the most robust, sure you can look to some higher end AV manufacturers, you would however be hard pressed to find another unit out there that provides all the bells and whistles the Marantz 8805 has.

In upgrading to the 8805 I also took the opportunity to switch over my amplifiers for a couple reasons.

I used to be a 100% Rotel guy, for a good 8 years all my equipment was Rotel, that is until they did not keep up with tech and were way out of date on their receivers, that is ultimately what drove me to Marantz.

Part of the move was due to the place I am at now with my usage and listening.

The 1095 offered 350w per channel and my Def Tech BP2000TL speakers were made for being driven VERY hard.

So the need was there.

As years past, and music became way less important, to me, and movies and gaming took the front stage. It no longer made sense to have these seriously over powered amps. They were overkill, and additionally they were huge power sucks.

So when one of my Rotel RMB-1095s started acting flaky a couple years ago, I grabbed a MM7055 demo unit from Best buy for a steal.

Since then I have been toying with the idea of going full Marantz.

And I can safely say I am glad I did.

The clarity of the amps and 150 and 140 wpc is fantastic. The sound is warm and right, and dialog through my center channel sounds even cleaner to my ears than the old 1095 produced.

So now my Rotel days are behind me and my future with Marantz is looking very very bright!

One last thing I want to mention about the 8805. Some of you may be concerned about future-proofing with the new HDMI 2.1 format on the horizon.

Well Marantz has officially committed to having the ability to upgrade this receiver when the time comes. It will be a paid upgrade, at a marginal cost, or so they say.

The unit would need to be sent to Marantz as it is a major update and not just a board swap, and they say it is expected to be available sometime in 2020 once the 2.1 spec has been finalized.

If you are a movie buff or game enthusiast like I am with a big enough dedicated space to accommodate a full theater, you own it to your ears to pick up one of these receivers.

You will not be disappointed in the least.

A solid 10/10 and one of the best pieces of audio equipment I have ever owned.