From the minute I fired up the first game and stepped into the role of Desmond, I was in love and saw something completely unique and special, and hoped that this could lead to something more.

Now having played 16 previous Assassin’s Creed games, using the term fanboy for me is warranted and a bit under stated.

I have been here for the good time (AC2) and the bad (AC: Unity) I have seen the games evolve and morph with the times, mechanics change and grow over the years.

Story lines die for no reason, and new heroes arise.

So after 16 years and 16 games, how does a franchise still keep things real and unique? You launch a game like Odyssey, that’s how.

They have taken a decade and a half worth of formula, and put it in a pressure cooker. Taken most of what is good about the series and squeezed out a diamond.

For those not interested in reading the rest of this, I will tell you right now, Assassin’s Creed Odyssey is one of the best games in the series, and save yourself 10 mins going over my review, and just go buy it.

For those still here, here we go.

This is hands down one of the biggest games Ubisoft has ever made.

On paper, sure Black Flag had more map to discover, but when 75% of it is water, it is not a big feat.

Odyssey on the other hand is mostly explorable land mass, sure there is a pile of ocean as well, but the land masses in the game are so densely populated with things to do and explore, it trumps any other game on the market for content by a wide margin.

For Example, here is about 80% of the full game map: 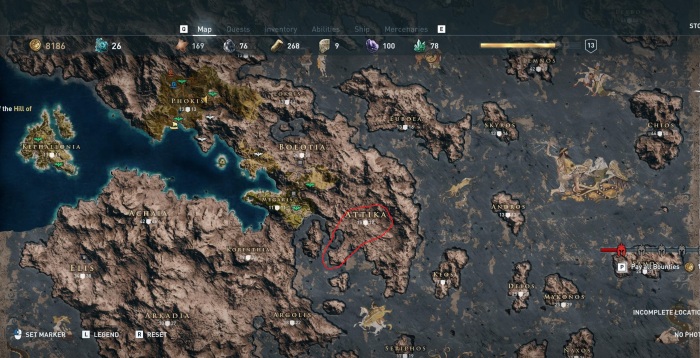 Here is just the red circle from above:

Every icon on the map is something to do. Chests to sneak in and get, people to kill, side quest to attain.

There are very likely 1000+ points like this spread over the map.

And this does not even take into account the main story, or the random things that pop up like mercenaries to kill, cult members to hunt, etc.

I went for a full 100% play-through, meaning that I revealed every single point of interest, and completed all locations.

And even though I am technically finished, Ubisoft is still reveling weekly new content, and not to mention new DLC for season pass holders.

The game for the first time ever allows you a choice of protagonists. You can choose a male of female character, both twins and both are identical in terms of skill tree and such, it is just an aesthetic change and a voice change pretty much.

That said, I was thrilled by the performance that Kassandra did. There has never been a more believably charismatic protagonist. She was simply amazing. From her humor to her fury, it was all very believable.

You should note whomever you do not pick to play, becomes the antagonist in the game. So pick wisely.

I am glad I didn’t pick Helios though, because if his performance on the other side of things was any indication, he was kind of a cold dead fish. To me at least. Where Kassandra seethes with realism, Helios is the typical yell all the time video game jerk.

The story takes you all over Greece, chasing your past, killing your demons and at the very core, is a touching game about family. Hard to fathom that in the midst of a murder simulator you can have emotional attachments and moments.

The “real world” portion of the game was a bit of a mixed bag. Ubisoft said prior to release that the real world segments were going to factor in more heavily in Odyssey, something I was very much looking forward to as that is one of my favorite part of the series, and a major sore point for me that the real world side has primarily moved into the comics and out of the games.

Unfortunately, this is a big lie in part by Ubi, there is exactly 3 real world scenes in the game. 2 of them playable, one a cut-scene only.

And of the 2, one is gated behind one of the better side stories in the game, but will however be generally missed by most people unless you are a completionist.

What you get for that completion however is one of the best “real world” segments in the game since the days of Assassin’s Creed 2.

It also foreshadows the upcoming DLC Atlantis coming next spring. So we may be seeing more of Layla then I presume.

The core of the game has change a lot into what can best be described as an action RPG. With level grinding elements and gear progression and upgrades, to RNG drops and chests.

A lot of people complained that the game felt too grindy, and felt that because Ubisoft would sell you a EXP booster that they intentionally made the game grindy.

This friends is pure and utter bullshit.

If you play the game, and do not try to rush it or speed run it, you have plenty of opportunity to progress normally without ever reaching a point of not having a high enough level to continue.

Sure if you skip 100% of the side quests and choose not to explore anything except to go from point A to point B in the story, you will run into places that are gated, but good God people, you are now complaining that you have to actually PLAY the game you spent $80 on.

How stupid an argument….

If Ubi had not sold you the option to EXP boost would this have even been a thing in media? Not a chance.

The skill tree is HUGE in Odyssey and just though normal playthrough to level 70, you will still not unlock 100% of the skills in the game.

But on a positive note, you can simply reset your choice and get all your points back to reallocate if you feel you picked some crappy skills: 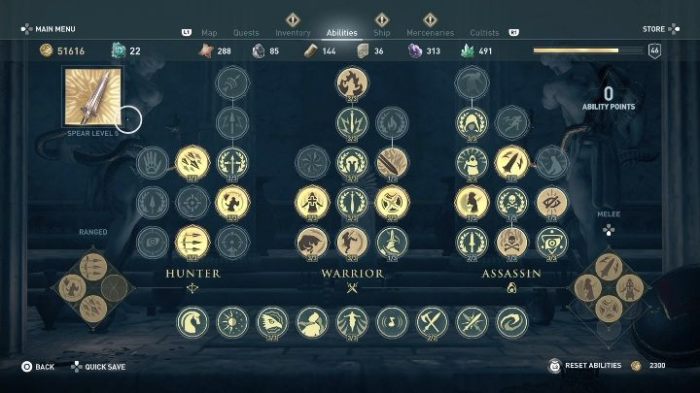 Visuals in this game were jaw droppingly beautiful. When presented in 4k and HDR, the image is outstanding.

There is a lot of dark carve and crypt exploration in Odyssey, and subtle shadows dancing in the dark in HDR look stunning, crisp and clear.

The sound itself in emulated Atomos though was a mixed bag. The Marantz 8805 had a hard time placing people and ambient noise sometimes. When a character was behind you, they would often come through the rear ceiling channels.

Not sure if this is the fault of the receiver for not being able to push the sound to the right location (because it is fake emulating Atmos) or if the location flags in the audio track were just too unclear for the game to separate properly.

Over all I believe Odyssey to be the 2nd best game in the franchise, behind AC2. Which is high praise to reach in a series that has 16 games before it (not counting mobile)

If this is the new standard for Assassin’s Creed games, it is a welcome direction to go in.

An absolute 10/10 and a must play for not just AC fans, but also for anyone who like massive sandbox games.