So I am back our second toy review at CCG.

This time we have the amazing Star Wars Lego B-Wing, set 10227 from the Ultimate Collector’s Series.

This set originally debuted in 2012 and retailed for just $199us, sadly  I missed the boat on the set going into moratorium and as with everything Lego, you either buy it retail when it is available, or pay through the nose later.

This baby set me back to the tune of $299us from Ebay and with shipping, tax and duty ended up closer to the $450cdn. Now that may seem like a boat load of cash for a Lego set, but it pales in comparison to waiting another year or so.

There are many Star Wars sets that are into the $2000 range and above. So as painful as it was, it could have been much worse later on.

This was one of my all time favorite ships growing up, having an on screen time of maybe 1 minute at very best in Return of the Jedi, it was memorable minute.

A lot of the design here was mirror images of each section, Lego did a very cool job of making this set look seamless, slapping a front and back identical wing or mid-section together and having it look like one complete section. 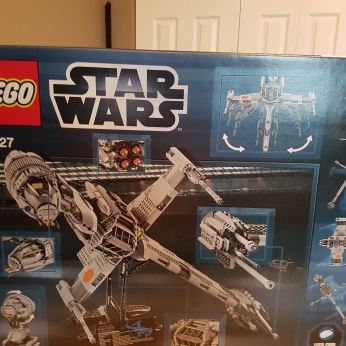 Something to note as well, Lego seemed to go through their spare parts bucket and find a rainbow of color choices for the interior, unseen elements. Now we oft get a few bizarre colored bricks in sets like that that will go unseen.

But never have I seen this much of a rainbow used, it is like they had a massive pile of unused bricks they had to get rid of and just tossed anything and everything they could into 10227.

When things came together though, boy do they look great.

The cockpit is an exceptional standout with some very unique design elements. They added what would usually be a tank track to two giant Technic tire rims to form the spinning cockpit. 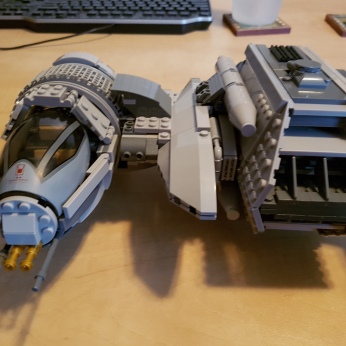 The main thrusters were also well thought out, using the before mentioned mirror design, they snapped together seamlessly, as did the main bottom wing.

One of the biggest complaints I have read online has been about the bottom gun attachment. It was a bizarre choice for such a sold ship otherwise, to be holding onto a massive bulk of lego with just 8 pegs. This could have been built a lot more solid in my opinion, but that being said, I did not have it fall off even once, something that a lot of others did have happen.

This is not a play set though, and more of a model, so really if it is just sitting on a shelf, it should never be an issue.

All told the build took about 4 hours, but I am also a very seasoned Lego vet. There were many complex portions of the ship, and it was one of the more enjoyable builds I have done.

The finished product looks amazing on the shelf next to the rest of the collection. 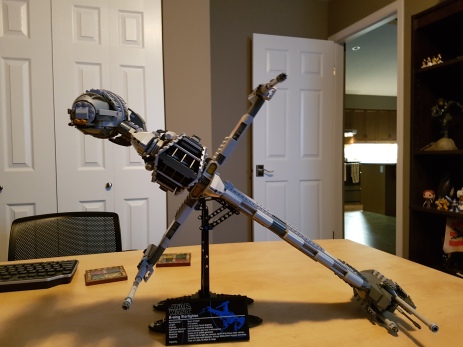 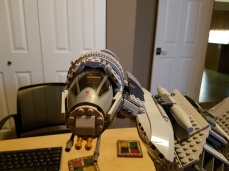 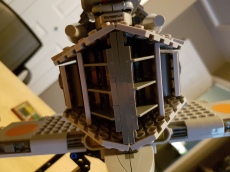 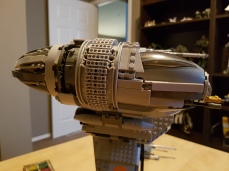 The only other complaint I have is the plaque that has all the details on it, the sticker itself is too small. Every other set I have owned has had a sticker that covers about 98% of the plaque, this one though is millimeters away from the edges on all side, it is almost as if they did not size it right in post.

That is a small gripe though, as it is black on black and not too noticeable from a few feet away. 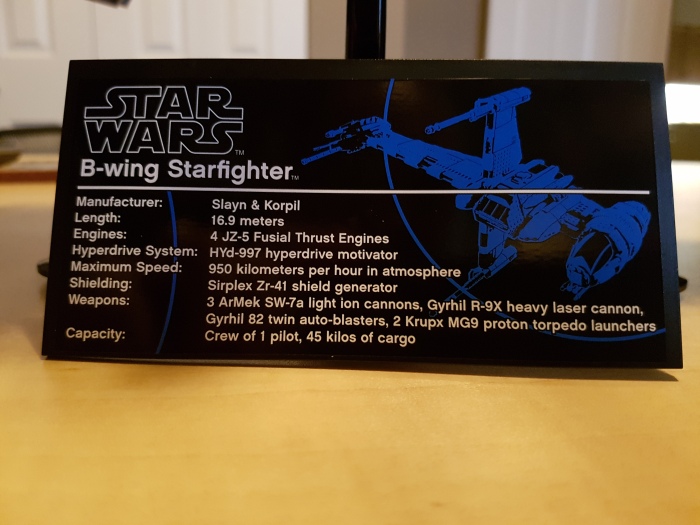 All in all, a fantastic set worthy of the UCS moniker.

A solid 8/10 and a highly recommended buy now before the price goes up even more.